A downloadable game for Windows

Todd VS. The Hellmyers Foundation An over the top, third-person, action-adventure game, made by me! Erik Skog.

You play as the mercenary Todd Parker. You have been sent to inflitrate the HF mining facility - due to demonic and ritualistic behaviours inside the mine. Your task is to stop whatever hellish plan thats underway down there.

This project won Best Game, Best Audio and Best 3D-Graphics during LBS Game Awards (a competition between all the LBS Kreativa schools in Sweden!  It won against about 40 other games)

This is incredibly good! The game feel is solid! Punching feels satisfying. Very much digging the PS2-style aesthetic. Looks very promising! Thank you very much for the demo!

Wow! This is awesome! Really good feeling and fun combat- The boss was scary and challenging.  The enemy movement/behaviors were interesting as well.

Great work here! While I talked a bit about improving the overall feel and direction of the combat at the end if the video, it's all still quite impressive in its current state! Hoping this isn't the end of Todd!

Haha oh wow! Thanks for playing, and especially for making a video!!

Yeah I can agree with a lot of what you said about the combat - my current project is aiming to have the same visceral feel you described, but with a super quick dodge as well. Super good that you left that feedback in the end there, since Im a solo-dev I kinda have to guess whats gonna be fun since I dont have playtesters either.

This demo took 2.5 months to make! Unfortunately I had to rush it for the competition.

Also Todd is a male! Didn't pay too much attention to the character design before, but someone at the competition also thought it was a woman, so I'll have to look into that hehe.

Thanks again! Look out for my next project since its looking to do everything Todd VS. The Hellmyers Foundation did, but improved in a lot of the ways you described!

I love finding games like yours! I'd be very interested in seeing your next project building off this, keep me in the loop or shoot me a message when it's out!

You have my curiosity...

Would be super happy if you wanted to make another video on one of my games! 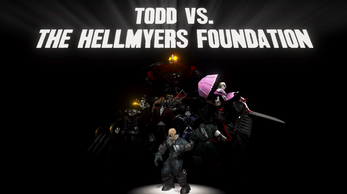